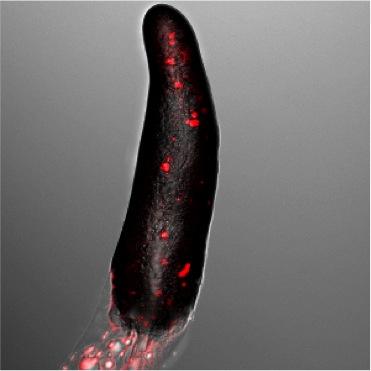 A social amoeba slug. In red are the reactive oxygen species produced by the sentinel cells, which are necessary for the generation of DNA-based nets that defend against bacterial invaders.©THIERRY SOLDATI, UNIGEWhen resources get low, social amoebae Dictyostelium discoideum come together by the thousands to form a stalk topped by a mass of spores, which can blow off in the wind to more-plentiful environments. About 80 percent of the amoebae that contribute to this cooperative structure become spores; approximately 20 percent form the stalk, sacrificing their own survival and reproduction for the success of the group. But there is also a third set of cells—about 1 percent of the population—that maintain the amoeba’s typical phagocytic functions, according to a study published yesterday (March 1) in Nature Communications.

“This last percentage is made up of cells called sentinel cells,” study coauthor Thierry Soldati of the University of Geneva...

Phagocytes of the human innate immune system can kill bacteria by enveloping the foreign bodies and attacking them with reactive oxygen species, or by expelling their own DNA as a poisonous net called a neutrophil extracellular trap (NET), which captures and kills bacteria in the extracellular environment. Amoebae can similarly engulf bacteria in their environment; Soldati and his colleagues in Geneva and at the Baylor College of Medicine in Houston, Texas, found that amoeba sentinel cells also produce DNA-based extracellular traps (ETs) when threatened with bacteria or lipopolysaccharides. Moreover, interfering with this process decreased the colony’s ability to clear infection.

“We have thus discovered that what we believed to be an invention of higher animals is actually a strategy that was already active in unicellular organisms one billion years ago,” Soldati said in the press release. “Our results demonstrate that D. discoideum is a powerful model organism to study the evolution and conservation of mechanisms of cell-intrinsic immunity, and suggest that the origin of DNA-based ETs as an innate immune defence predates the emergence of metazoans,” he and his colleagues wrote in their paper.

Corrections (March 14): The first paragraph of this article has been updated to fix two typos.