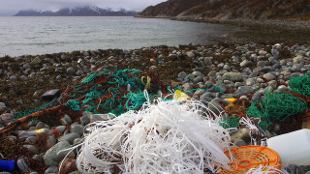 Researchers identified the first floating islands of plastic and other trash more than 20 years ago. Plastic has also been found in the stomachs of diverse marine life, including whales, birds, and turtles. Other animals have been found washed up dead on the beach as a result of such pollution. Now, a study published last week (December 10) in PLOS ONE estimates the global abundance and distribution of ocean plastic: based on data collected during 24 expeditions from 2007 to 2013 along with and information from visual survey transects, the researchers’ model predicted that the oceans contain “a minimum of 5.25 trillion particles weighing 268,940 tons,” they wrote.

“[T]here is too much plastic in the ocean,” Andrés Cózar of Spain’s University of Cadiz who was not involved in the study told The New York Times (NYT). Cózar, who last year published with colleagues in PNAS...

By weight, the largest source of ocean plastic comes from discarded fishing nets and buoys, according to lead author Marcus Eriksen of the nonprofit antipollution group 5 Gyres. Other sources include consumer trash, such as bottles, toothbrushes, bags, and toys. “It’s everything you can imagine made of plastic,” Eriksen told The Christian Science Monitor. “It’s like Walmart or Target set afloat.”

Much like Cózar observed last year, Eriksen and his colleagues found that tiny bits of plastic—the size of grains of sand or less—were less common than expected, possibly because they are falling to deeper waters or consumed by fish or other animals. “Plastics are like a cocktail of contaminants floating around in the aquatic habitat,” University of California, Davis, marine ecologist Chelsea Rochman told NYT. “These contaminants may be magnifying up the food chain.”

Given the vast amount of plastics estimated by the new model, cleaning up the world’s oceans won’t be as simply as launching a fleet of floating garbage collectors. “Unless we can stop the flow—turn off the tap of these pieces of debris going into the ocean all the time—we’re not going to be able to stop the problem,” Nancy Wallace, director of the marine debris program for the US National Oceanic and Atmospheric Administration, told NYT.