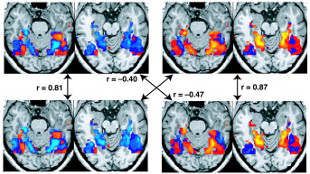 fMRI showing two distinct patterns of brain activity.Wikimedia, National Institute of Mental HealthScott Routley, a 39-year-old Canadian patient that doctors had considered vegetative and incapable of communicating following a car crash 12 years ago, was able to tell doctors that he’s not in pain via functional magnetic resonance imaging (fMRI) of his brain. The breakthrough, reported this week (November 13) by BBC News, marks the first time that a clinically vegetative patient has been able to answer questions pertinent to their condition.

"Scott has been able to show he has a conscious, thinking mind,” neuroscientist Adrian Owen of the University of Western Ontario told the BBC. “We have scanned him several times and his pattern of brain activity shows he is clearly choosing to answer our questions. We believe he knows who and where he is."

To communicate with Routley, Owen and his team used their previously...

"Asking a patient something important to them has been our aim for many years,” Owens said. “In future, we could ask what we could do to improve their quality of life.”