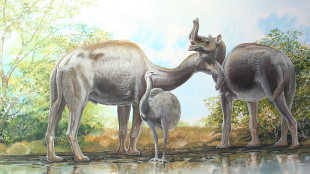 Macrauchenia, a humpless camel with an extended snoutILLUSTRATION BY PETER SCHOUTEN FROM THE FORTHCOMING BOOK "BIGGEST, FIERCEST, STRANGEST" Unable to isolate DNA from ancient fossils of the so-called South American ungulates, researchers turned to collagen, a major structural protein of bone that survives some 10 times longer than nucleic acids. Comparing the protein’s sequence with that of extant species, the researchers placed the extinct beasts—which included two 12,000-year-old specimens of Toxodon, a sort of hippo-rhino hybrid with rodent-like teeth, and two camel-like Macrauchenia specimens, which could not be dated—among the Perissodactyla, a clade made up of horses, tapirs, and rhinos. The results, which refute earlier suggestions that the beasts belonged among elephants and manatees as part of the group Afrotheria, were published this week (March 18) in Nature.

“Certainly 4 million years will not be a problem,” study collaborator Matthew Collins, a bioarchaeologist at the University of York in the U.K., told Nature. “In cold places, maybe up to 20 million years.”

In addition to some concerns about their methodology, however, some critics pointed out that, because collagen changes relatively little over time, the amount of information one can glean from its sequence is limited. Still, “it’s good to see something come out on Macrauchenia at last,” Alan Cooper, an ancient DNA specialist from the University of Adelaide, told National Geographic’s Not Exactly Rocket Science. “A lot of us [have] been trying to get ancient DNA out of remains for a while. I suspect that’ll finally happen, at which point it’ll be really interesting to see how the [family trees] compare.”