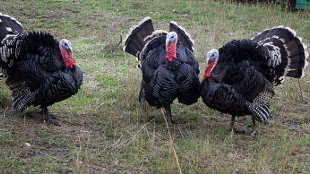 Wikimedia, David PerezIn a Mayan archeological site in Guatemala, researchers found remains of domesticated Turkey dating to between 300 B.C. and 100 A.D., according to a study published earlier this year (August 8) in PLOS ONE. The results are surprising because Mayans weren’t known for domesticating animals—just plants—and because it means the domestic turkey is 1,000 years older than previously thought.

“We might have gotten the timing of the introduction of this species to the ancient Maya wrong by a significant chunk of time,” lead author Erin Thornton, a research associate at the Florida Museum of Natural History, said in a press release. This is significant because “plant and animal domestication suggests a much more complex relationship between humans and the environment—you’re intentionally modifying it and controlling it,” she added.

Using DNA sequencing and comparisons of turkey bone structure, the researchers determined that the fossil belonged to the...

Moreover, the remains of the Mexican turkey was found in a ceremonial site containing large complexes of temples, which suggests that the turkey may have been at the center of an elite sacrifice, meal, or feast.

“This study is extremely significant,” Florida State University anthropology professor emeritus Mary Pohl said in the statement. “I think it opens up a whole new perspective on the Maya and animal domestication.”