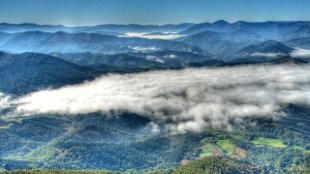 Is the fog lifting on mysterious Basque origins?WIKIMEDIA, RUSSAVIAThe mysterious origins of the Basque people of northern Spain and southern France have become a little clearer thanks to DNA extracted from centuries-old human remains unearthed in a Spanish cave. Nearly 700,000 Basques, who speak a globally unique language and retain genetic patterns that distinguish them from other Europeans, seem to be descendants of Neolithic farmers who mixed with local hunters before becoming genetically isolated from the rest of Europe for millennia.

Researchers led by population geneticist Mattias Jakobsson from Uppsala University in Sweden analyzed DNA from eight skeletons pulled out of El Portalón cave in the Basque country of northern Spain. The team compared the genomes extracted from the remains, dated to between 3,500 and 5,500 years old, to modern European genomes and more than 12 ancient genomes from 5,000- to 8,000-year-old skeletons from Western and Central Europe....

The researchers suggested that early Basques likely sheltered from waves of European migration that began about 5,000 years ago. “It’s hard to speculate, but we’ve been working with Basque historians and it’s clear from the historical record that this area was very difficult to conquer,” Jakobsson told BBC News.

The findings contradict earlier models, which suggested Basque people were genetically distinct from other Europeans because they represented a relic population of ancient hunter-gatherers. If that were true, modern Basques would have genetic signatures that were more similar to ancient DNA recovered from hunter-gatherers rather than to the El Portalón remains. “We can finally set aside this old story,” Jakobsson told Science.