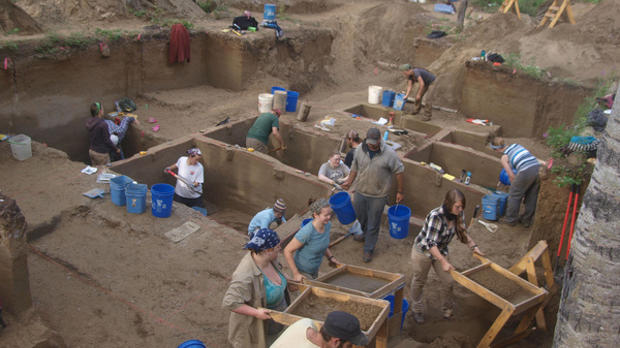 The Upward Sun River site in Alaska, where researchers unearthed the infants' remains at an ancient burial groundIMAGE: BEN POTTER/UNIVERSITY OF ALASKA FAIRBANKSAncient mitochondrial genomes from infants who lived more than 11,500 years ago in Beringia—the area of North America in the vicinity of the Bering Strait—have yielded tantalizing clues about how humans moved from Asia into new territory in the Americas. Using the latest ancient DNA technology, researchers from the University of Alaska and elsewhere sequenced the genomes from human remains found at a millennia-old burial site in Alaska’s rugged interior and found that two infants—one a premature baby and the other a 6-week-old—had different mothers, even though scientists had previously assumed they were twins. The research team published the findings in PNAS on Monday (October 26).

“This is the oldest human remain we've found so far north,” study coauthor Justin Tackney of the University of...

In addition to being very old, the remains of the children turned out to be very informative. One of the babies belonged to haplogroup C1b, and the other belonged to the B2 genetic lineage. Both lineages are present in modern Native Americans, but B2 was thought to be confined to southern tribes, such as the Navajo and Anasazi. Because representatives of the B2 lineage were previously thought to be absent from northerly latitudes, some anthropologists had hypothesized that the lineage’s ancestors populated the Americas in a wave of migration that was distinct from Siberians crossing the Bering land bridge some 20,000 years ago. The new findings suggest it may have been a single wave of migration that saw the ancestors of both the C1b and B2 haplogroups make it into the Americas. The children “may well be a remnant of that original Beringian group,” study coauthor Dennis O’Rourke of the University of Utah told The New York Times. “It may give us a snapshot of that earlier time.”

The burial site has also provided an unprecedented peek into ancient Beringian culture. The babies were carefully placed atop a bed of red ocher after they died, and their bodies were surrounded by antlers whittled into hunting darts. “These things we hardly ever find—it’s a very rare window into the worldview of these people,” study coauthor Ben Potter at the University of Alaska Fairbanks told the New York Times.