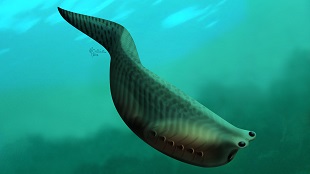 An artist's rendering of MetasprigginaMARIANNE COLLINS © CONWAY MORRIS AND CARONMetaspriggina, was described in Nature this week (June 11). Until now, researchers’ knowledge of the fish was based on incomplete fossils. A team led by Jean-Bernard Caron of the Royal Ontario Museum found an unexpectedly rich deposit of fossils—including 40 Metaspriggina—in the Burgess Shale, the famed fossil field in the Canadian Rockies, in 2012. Caron invited Simon Conway Morris of the University of Cambridge, a leading expert on the extinct animal, to collaborate. The team’s fossil analysis revealed that the fish had several vertebrate features, including a notochord, camera-like eyes, paired nasal sacs, what appeared to be a cranium, and similar muscle structure similar to modern fish.

“It’s clearly a benchmark early vertebrate, which we haven’t had before,” Thurston Lacalli of the University of Victoria in British Columbia, who was not involved in the research, told...

Over in Scientific Reports, a team led by You’an Zhu of the Chinese Academy of Sciences this week (June 12) reported on a fossil of an early jawed fish that’s approximately 423 million years old. The large fish, Megamastax, appears to have used its strong jaws to crack open smaller, shelled fish.

“By sheer size alone, it could have eaten just about anything it wanted, although its teeth suggest it had a preference for hard-shelled prey,” coauthor Brian Choo told New Scientist. “Clearly there is an early history of jawed vertebrates that extends much further back in time that we currently know very little of,” he added.