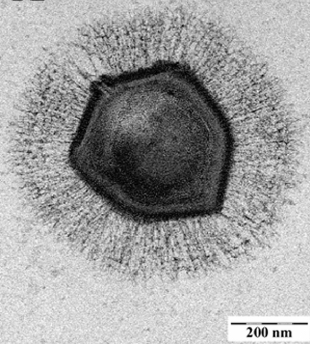 Electron microscopic image of a mimivirus, the first type of giant virus discoveredWIKIMEDIA, E. GHIGO ET AL.Discoveries of viruses with physical and genomic dimensions that challenge the very definition of these infectious agents—the so-called giant viruses—have made headlines for more than a decade now. And they’ve made the news once again this week (March 3), with the publication in PNAS of a new species that a team led by researchers at Aix-Marseille University in France discovered buried in the permafrost of Siberia.

The new virus, dubbed Pithovirus sibericum, measures 1.5 μm in length and 0.5 μm in diameter—even bigger than former record holders, the pandoraviruses, which are only 1 μm long and 0.5 μm in diameter. P. sibericum was identified as part of a survey of the virome of Siberian permafrost, isolated from a sample that’s more than 30,000 years old, according to the researchers. Nevertheless,...

“The revival of such an ancestral amoeba-infecting virus . . . suggests that the thawing of permafrost either from global warming or industrial exploitation of circumpolar regions might not be exempt from future threats to human or animal health,” the authors wrote.

Some argue that the risk is low—“a very small proportion [of the viruses on Earth] represent viruses that can infect mammals and an even smaller proportion pose any risk to humans,” Edward Mocarski, a professor of microbiology at Emory University told National Geographic. But study coauthors Jean-Michel Claverie and Chantal Abergel of Aix-Marseille emphasize that it’s possible, and recommend “vigilance and continued testing,” National Geographic reported. “[T]he notion that a virus could be ‘eradicated’ from the planet is plain wrong and gives us a false sense of security,” they said. “At least a stock of vaccine should be kept, just in case.”

The discovery also calls into question the veracity of some viral eradications, including smallpox and the livestock disease rinderpest, Claverie told The Verge. “We might be able to eradicate viruses from the surface of the planet,” he said, “but that doesn’t mean that there isn’t a single particle of that virus still alive somewhere.”