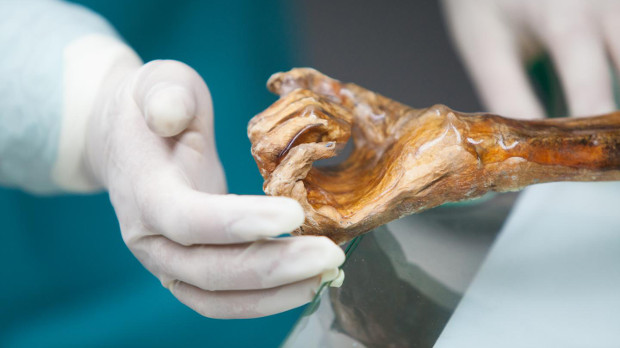 EURAC, MARION LAFOGLERThe stomach bacterium Helicobacter pylori is found in humans the world over with distinct regional signatures in its DNA. An international team recently sequenced bacteria from the gut of a 5,300-year-old European man and, based on the strain of H. pylori that was present in the specimen, suggested that human migration from Africa to Europe occurred after the Copper Age. The results were published last week (January 7) in Science.

“Iceman,” or Ötzi, was first uncovered in the Alps in 1991. Since then, his well-preserved body has aided studies of ancient culture, clothing, and weaponry. Scientists initially thought his stomach was empty, yielding little information about human diet, but those examining Iceman’s anatomy revealed in 2011 that his stomach had been pushed unusually far up into his torso—they had previously been looking at his colon instead. Ötzi’s stomach was in fact full of ibex meat when...

In the current study, researchers led by Frank Maixner from the European Academy of Bozen/Bolzano (EURAC) sampled Iceman’s stomach contents and sequenced the bacterial DNA, looking for H. pylori. “The material was quite crumbly—it was like sand,” Maixner told STAT News.

Most modern Europeans carry a hybrid strain of bacteria that combines Asian and African H. pylori, but sequencing revealed that Iceman’s bore signs of an Asian origin. The difference suggests that the human migration from Africa to Europe may have not yet occurred at the time of Iceman’s death, placing it “within the past few thousand years,” according to the authors.  “The history of settlements in Europe is much more complex than previously assumed,” Maixner said in a press release.

Other experts were skeptical about the conclusions, given the sample size of one. “Go get 30 other mummies from around the world and get more data,” Mark Achtman, a microbiologist at Warwick Medical School in England who was not involved with the research, told STAT News. The study’s authors agreed that more mummies would help: “We always have to keep in mind that we’re talking about one example,” coauthor Albert Zink from EURAC told Science News.