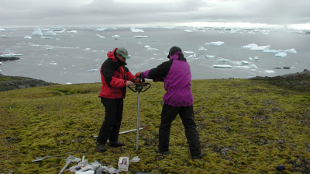 Researchers drill in the moss banks of Signy.P. BOELENFrozen microorganisms are occasionally able to be revived in the lab, such as microbes that have been suspended in permafrost for thousands of years. Most recently, researchers thawed a 30,000-year-old giant virus discovered in the Siberian permafrost. But when it comes to multicellular organisms, the oldest examples of such cryptobiosis are only a decade or two old, Wired Science reported—until now.

This week (March 17), researchers from the British Antarctic Survey and Reading University reported having reincarnated a moss that had been frozen in Antarctic ice for more than 1,500 years. They published their results in Current Biology.

“This experiment shows that multi-cellular organisms, plants in this case, can survive over far longer timescales than previously thought,” coauthor Professor Peter Convey of the British Antarctic Survey said in a press release. “These mosses, a key part of the...

The team drilled core samples from the moss beds on Signy Island off the coast of Antarctica, then warmed the samples in an incubator to normal growth temperature and light exposure. After a few weeks, even the mosses from the oldest samples—aged at least 1,530 years—began to sprout new shoots.

“If they can survive in this way, then recolonisation following an ice age, once the ice retreats, would be a lot easier than migrating trans-oceanic distances from warmer regions,” Convey said in the statement. “It also maintains diversity in an area that would otherwise be wiped clean of life by the ice advance. Although it would be a big jump from the current finding, this does raise the possibility of complex life forms surviving even longer periods once encased in permafrost or ice.”