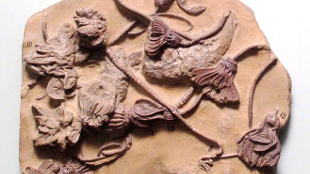 Fossil crinoids at the Smithsonian Museum of Natural HistoryWIKIMEDIA, SANJAY ACHARYAResearchers have found organic molecules sealed inside the fossilized remains of 340-million-year-old fossilized sea creatures called crinoids, according to a study published in the March issue of Geology. The molecules are the oldest to ever be isolated directly from a fossilized organism, and may shed light on evolutionary relationships between ancient and living crinoid species and other echinoderms.

Fragments of biological molecules are often found scattered in rock, said coauthor William Ausich, a geologist at Ohio State University, in a press release. “But this is the oldest example where anyone has found biomarkers inside a particular complete fossil.”

The fossilized crinoids—spindly, plant-like animals with multiple feathery arms, which are used to gather food particles—were buried alive in the Midwest roughly 340 million years ago, when much of North America was under the ocean. Graduate student Christina...

When the team analyzed the chemical composition of the fossils, they identified molecules similar to quinones—compounds found in modern crinoids that function as pigments or toxins to deter predators. The researchers also found that different species of ancient crinoids contained different types of quinones.

The researchers now plan to establish exactly what type of quinones they found in the ancient crinoids, and determine what they might reveal about the different species in which they were preserved.  “These molecules are not DNA, and they’ll never be as good as DNA as a means to define evolutionary relationships, but they could still be useful,” said Ausich. “We suspect that there’s some kind of biological signal there—we just need to figure out how specific it is before we can use it as a means to track different species.”