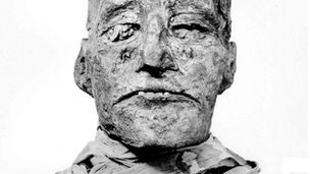 The mummy of Ramesses IIIBMJIn 1155 BC, Egyptian Pharaoh Ramesses III faced a bloody demise. According to a study published yesterday in the British Medical Journal, his throat was slit by conspirators, and his son, Pentawere, may have led the charge. The study also revealed that Pentawere himself was then likely strangled.

Paleopathologist Albert Zink of the Institute for Mummies and the Iceman in Italy and his colleagues inferred this new information on the basis of DNA samples and CT scans taken from two mummies—that of Ramesses III himself, and another of a unidentified young man that was found with him in his royal tomb near the Valley of the Kings in Egypt. In the scans of Ramesses III, the researchers identified a 2.7-inch-wide gash across his throat, just below the larynx—a wound that could have caused immediate death, forensic analysts concluded.

DNA tests then identified the young man as a blood relative of Ramesses III, most likely Pentawere, who, according to ancient court records, was found guilty at trial and took his own life. But examination of the young man’s body revealed an overinflated chest and compressed skin folds and wrinkles around his neck—signs that he may have been strangled.

Though the damage could have been inflicted after he died, there’s no doubt the young man was “badly treated for a mummy,” Zink told the BBC, including being covered with a “ritually impure” goatskin that may indicate a non-royal burial procedure.