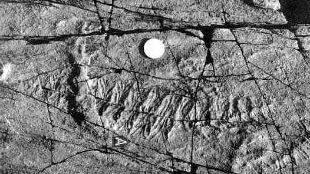 WIKIMEDIA, MISTAKENPOINTAbout 550 million years ago, at the bottom of the ocean near modern-day Newfoundland, organisms called rangeomorphs were reproducing in remarkably complex ways. The creatures could create clones as plants do, plus bud off progeny that could float away and produce their own clones, according to a study published this week (August 3) in Nature.

“Reproduction in this way made rangeomorphs highly successful, since they could both colonise new areas and rapidly spread once they got there,” Emily Mitchell, a postdoc at the University of Cambridge who led the study, said in a press release. “The capacity of these organisms to switch between two distinct modes of reproduction shows just how sophisticated their underlying biology was, which is remarkable at a point in time when most other forms of life were incredibly simple.”

Neither plant nor animal, rangeomorphs were some of the first complex organisms to...

Analyzing fossils, Mitchell and her colleagues found the distribution of a particular rangeomorph, Fractofusus, clustered around a large, presumably founding specimen of the colony—similar to how plants send out runners. The location of these large Fractofusus fossils suggested they had settled after being released into the water as so-called propagules.

“Such a strategy would have allowed for the rapid exploitation of localized areas, as well as for transport to new, previously uncolonized areas,” the authors wrote in their report.

Simon Conway Morris of the University of Cambridge who was not part of the research told Discovery News that Fractofusus and similar organisms “are abundant, well-preserved and have a global distribution, but they remain amongst the most enigmatic fossils, and any new light on their way of life is important.”