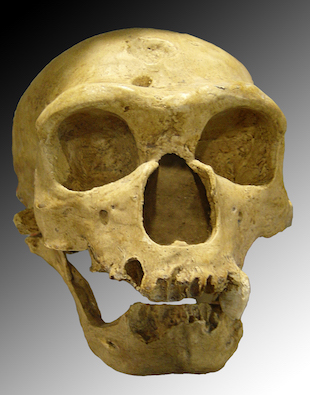 Homo neanderthalensis skullWIKIMEDIA, LUNA04Researchers at Stanford have analyzed the sequence of a Neanderthal Y chromosome from a specimen found in Spain, and the findings reveal what may have kept the lineage separate from modern humans, according to a study published today (April 7) in The American Journal of Human Genetics.

“Characterizing the Neanderthal Y chromosome helps us to better understand the population divergence that led to Neanderthals and modern humans,” study coauthor Fernando Mendez of Stanford said in a statement. “It also enables us to explore possible genetic interactions between archaic and modern [gene] variants within hybrid offspring.”

Using data from a public database, Mendez, along with study coauthor Carlos Bustamante, also of Stanford, and colleagues analyzed the Y chromosome sequence of a 49,000-year-old Neanderthal specimen from El Sidrón, Spain, comparing it with modern human and chimpanzee chromosomes. The researchers found that the ancestor of Neanderthal and modern human Y chromosomes belonged to a population that lived approximately 588,000 years ago—around the same time the two lineages are thought to have diverged (between 400,000 and 800,000 years ago).

While many people today possess some Neanderthal DNA, the Neanderthal Y chromosome has not been found in modern humans; the researchers suspect it has likely gone extinct.

“That could be one reason why we don’t see Neanderthal Y chromosomes in modern human populations,” Mark Pagel, an evolutionary biologist at the University of Reading, U.K., who was not involved in the study told New Scientist.

Mendez and colleagues found mutations in the PCDH11Y, TMSB4Y, USP9Y, and KDM5D genes—three of which are involved in producing male-specific minor histocompatibility complex antigens. One of the genes, KDM5D, may be involved in an immune response that could cause a pregnant woman’s immune system to attack her male fetus, resulting in a miscarriage.

“The functional nature of the mutations we found suggests to us that Neanderthal Y chromosome sequences may have played a role in barriers to gene flow,” Bustamante said in a statement, “but we need to do experiments to demonstrate this and are working to plan these now.”