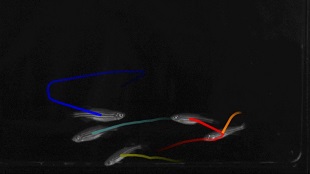 CAJAL INSTITUTE, ALFONSO PÉREZ-ESCUDEROResearchers have developed a new system for tracking individual animals in a group in the lab that could save hours typically spent manually tracking their movements, according to a study published this week (June 1) in Nature Methods. A team led by Gonzalo de Polavieja of the Cajal Institute in Spain developed a software tool that uses a previously discovered algorithm to identify individual animals in videos based on the pixelated markings on their bodies, which create a “fingerprint” of each animal.

Previous animal-tracking tools would often go awry, for example, when two similar-looking animals crossed in front of one another. The newly developed tool, which the creators call idTracker, can create video fingerprints of up to 20 individuals in five minutes to 10 minutes. The team was able to track individuals among groups of mice, fruit flies, ants, zebrafish, and medaka fish with 99.7...

“From now on, we will be able to quantitatively determine the rules of animal behavior in groups taking into account the individuality of each animal,” de Polavieja said in a statement.