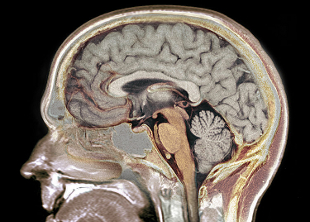 WIKIMEDIA, GARPENHOLMIdentifying biomarkers in the blood that can accurately predict whether a patient will develop Alzheimer’s disease is a major goal of current research into the neurodegenerative disorder, and while efforts have proven largely unsuccessful, there have been a few glimmers of hope in the field. This past March, Howard Federoff of Georgetown University Medical Center in Washington, DC, and his colleagues identified 10 lipids that could predict the development of dementia with 90 percent accuracy, and now an international group of researchers has found that a panel of 10 proteins shows a similar level of predictive power.

Lead researcher Simon Lovestone of King’s College London and the University of Oxford and his colleagues analyzed the blood of 452 healthy people, 220 with mild cognitive impairment, and 476 with Alzheimer’s disease, and were able to identify those who would develop cognitive impairment in the next year with 87...

“Alzheimer’s begins to affect the brain many years before patients are diagnosed with the disease,” Lovestone told The Guardian. “A simple blood test could help us identify patients at a much earlier stage to take part in new trials and hopefully develop treatments which could prevent the progression of the disease.”

Unfortunately, while such tests may accurately identify those who will develop dementia, they also yield high rates of false positives.

“[It] will take several years and [we] need many more patients before we can be certain these tests are suitable for routine clinical use,” noted coauthor Ian Pike, chief operating officer at Proteome Sciences, to BBC News, but “that process can start fairly quickly now.”