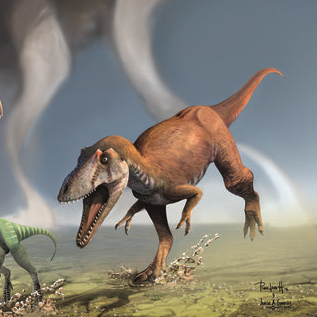 JORGE GONZÁLEZ AND PABLO LARANo one is sure what, exactly, Tyrannosaurus rex did with its short arms. But Argentinian and American scientists have discovered a new dinosaur species that had the same puzzling feature, they reported this week (July 13) in PLOS One.

Gualicho shinyae, whose 90 million-year-old fossil remains were found in Patagonia, Argentina, was 25 feet long and weighed about a ton—roughly the same size as a polar bear. Yet, full grown, this predator had arms the size of a child’s, New Scientist reported.

G. shinyae and T. rex stem from different evolutionary branches. T. rex’s earliest ancestors had arms that were actually long, study coauthor Peter Makovicky, a paleontologist at the Field Museum of Natural History in Chicago, told The New York Times. But for some reason, T. rex evolved to have stubby arms. Because this trait appears to have arisen independently...

Scientists still don’t know what that purpose may have been. But theropods—a group of two-legged, flesh-eating dinosaurs—have been known to have forelimbs of questionable utility, Popular Science noted.

“There are a lot of different groups of theropods that tend to reduce the size of their hands and their arms or change the way that they’re used,” Lindsay Zanno, head of the North Carolina Museum of Natural Sciences’ Paleontology Research Lab who was not involved in the study, told The Christian Science Monitor.

“We don’t actually know what would have triggered a reduction in the forelimb in each individual lineage,” Makovicky told The New York Times. “But obviously there was some adaptive advantage because we see it multiple times in different lineages of theropods.”