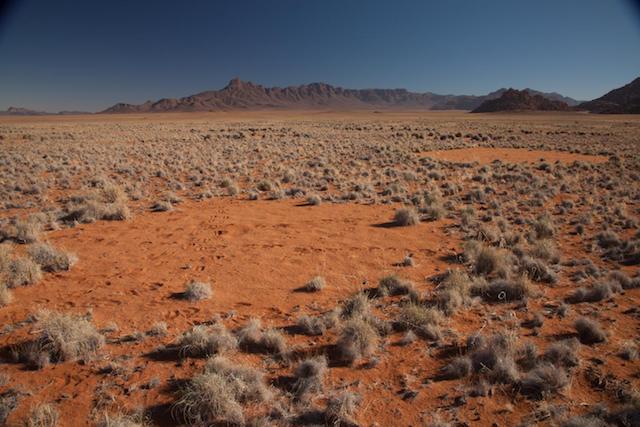 Parts of the Namib desert are covered in “fairy circles,” patches of empty earth surrounded by plants. There are many myths about the origins of these strange patches: Some believe they are the footprint of gods or the result of poisonous dragon breath. Scientists have proposed two more plausible explanations—either termite colonies fighting for their share of greenery, or a case of resource competition between plants. Now, a study published Wednesday (January 18) in Nature suggests that both mechanisms may be at play.

“This is a classic thing in ecology where debates will emerge and go on for decades,” coauthor Rob Pringle, an ecologist at Princeton University, told the Washington Post. “And the resolution after all that time is usually, 'Well, it's a little bit of both.’”

Pringle and his colleagues ran computational models to see what types of patterns of vegetation hungry...

Still, not all experts are not convinced. Stephan Getzin, an ecologist at the Helmholtz Centre for Environmental Research in Germany, who was not involved in the research, told The New York Times that his group reported fairy circles in 2016 cropping up in areas that do not have any termites. “Logically, if there are fairy circles without the presence of termites, the termite theory cannot be considered as a strong explanation for the phenomenon.”