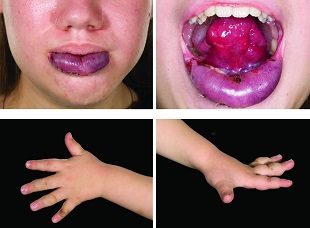 Mutations in the PIK3CA gene are linked to venous malformations in the lip, tongue, and hand.SCIENCE TRANSLATIONAL MEDICINE, S. CASTILLO ET AL. (VIA EUREKALERT)Congenital defects in normal blood vessel growth can cause disfiguring lesions called venous malformations (VM) that affect around 1 in 5,000 people. The principal cause of these lesions—mutations in the TEK gene—only accounts for about 50 percent of cases, leaving the remainder largely unexplained. Recently, while studying PIK3CA, a cancer gene coding for a protein involved in cell growth and proliferation, a team led by researchers at University College London discovered a role for this gene in causing VM in mice and humans. The team’s findings were published yesterday (March 30) in Science Translational Medicine.

“We originally set out to investigate cancer by inducing PIK3CA mutations in mice, with no idea that they might be linked to other diseases,” study coauthor Bart...

The findings support “the theory that blood vessels are much more sensitive to PIK3CA than other cells,” study coauthor Mariona Graupera of the Bellvitge Biomedical Research Institute in Barcelona said in the statement. “We have previously looked at what happens when PIK3CA is inactivated, but here we saw that an activating mutation in this gene can lead to a dramatic overgrowth of blood vessels.”

The researchers also showed that a drug called rapamycin, which blocks signaling by the PIK3CA protein, reduced the development of VM in mice. However, they noted, rapamycin is unlikely to make a good treatment option for humans. “In patients it can have serious side-effects and compromise the immune system,” study coauthor Sandra Castillo of University College explained in the statement, adding that drugs that directly inhibit PIK3CA could provide a viable alternative.