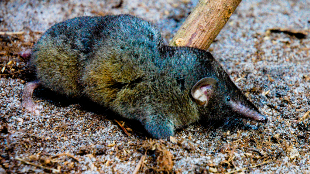 BILL STANLEY, BIOLOGY LETTERS (2013)Thor’s hero shrew (Scutisorex thori) is an appropriate name for the newly discovered species that, like its sister species the large, woolly hero shrew (Scutisorex somereni), has an unusually thick spine with interlocking vertebrae. In the case of the woolly hero shrew, research has shown that these features make its spine stronger than that of any other vertebrate relative to its body mass, though the function of this super spine is unclear. (Thor is the god of strength in Norse mythology.)

Vertebrate biologist Rainer Hutterer of the Alexander Koenig Zoological Research Museum in Bonn, Germany, and colleagues collected the new species in the Republic of Congo. The team described the novel species in Biology Letters today (July 24), noting its flattened ribs and fewer lower vertebrae compared to the original hero shrew. The researchers estimated that the Thor’s shrew represents an...

“The discovery helps us understand how this extreme specialization has evolved incrementally,” Andrew Kitchener, a vertebrate biologist at National Museums Scotland, told Nature.

Furthermore, identifying a second species with a super spine could provide clues as to the structure’s mysterious function. “We hypothesize that this shrew—with its expanded backbone and associated musculature—can crawl in-between the trunk and leaf bases of trees to allow access to concentrated food resources that would normally be protected from predation,” coauthor William Stanley, a biogeographer at the Field Museum of Natural History in Chicago, told BBC News. “The same mechanism could be used for getting under logs or rocks which they could lift out of the way.” Of course, researchers must now see if they can catch these animals performing such behaviors.