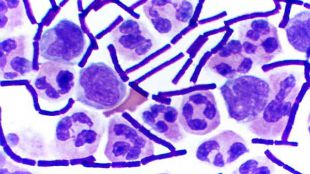 WIKIMEDIA, YUVAL MADARAn incident in May of this year, in which a private company inadvertently received live anthrax spores from a US Army lab, has led to the revelation that such shipments have been sent dozens of times over the last decade. According to the latest numbers from the Department of Defense (DoD), 86 laboratories had live anthrax—instead of inactivated cells—sent to them directly by the Army facility.

“A key finding by the [DoD] committee is that there is insufficient technical information in the broader scientific community to guide the development of thoroughly effective protocols for inactivation of spores and viability testing of BA [Bacillus anthracis],” according to the DoD report, published July 13. “This has contributed to the creation of protocols that do not completely or permanently sterilize BA with gamma irradiation.”

The DoD committee found that staff members at the Army lab followed the...

“By any measure, this was a massive institutional failure,” Deputy Secretary of Defense Bob Work told reporters last week (July 23), according to USA Today. The news outlet also reported that “although no illnesses have been linked to the specimens, at least 21 people who had direct contact with the specimens have been given antibiotics as a precaution.”

Some scientists did not appear satisfied with the DoD’s conclusions. “This pretty much is a whitewash, where the procedures were the culprit,” Richard Ebright, a molecular biologist at Rutgers University, told BuzzFeed News. “Here we have a human failure that did not involve humans somehow. It’s really quite remarkable.”

The lab that sent the shipments has a moratorium on distributing samples. Additionally, an investigation of the technical leadership of the facilities is underway, according to BuzzFeed.