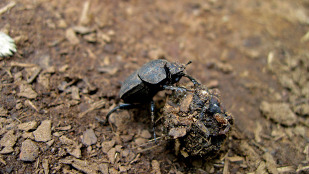 PIXABAY, LAKEWOODUCCTreating livestock with prophylactic antibiotics “may have unintended environmental impacts mediated by interactions among the wide range of micro- and macro-organisms found in agroecosystems,” researchers from the University of Colorado, Boulder, and their colleagues reported today (May 25) in Proceedings of the Royal Academy B. Specifically, the international team analyzed the downstream effects of treating cattle with a broad-spectrum antibiotic, finding that the drug—a tetracycline antibiotic—affected greenhouse gasses emitted from the animals’ dung. The team also identified residual effects on dung beetles, including alterations to the insects’ microbiomes.

“Antibiotics restructure dung beetle microbiota and modify greenhouse gas emissions from dung indicate that antibiotic treatment may have unintended, cascading ecological effects that extend beyond the target animal,” the authors wrote in their paper.

“We were surprised to find such a big increase in methane emissions in dung,” study coauthor Tobin Hammer of the University of Colorado, Boulder, told...

Hammer told BBC News it remains to be tested whether the effects apply to non-tetracycline antibiotics. Further, he said, he and his colleagues have yet to discern “whether, in terms of environmental impact of antibiotics, the problem of methane emissions is outweighed by the benefits of increasing feed efficiency and treating disease.”