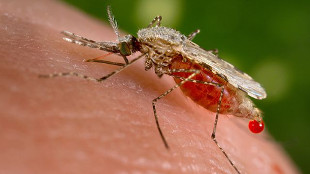 CDC, JIM GATHANYWhen mosquitoes encounter antibiotics in their meals of blood, their gut microbiomes are drastically reduced and less adept at fending off a subsequent malaria infection, scientists reported this month (January 6) in Nature Communications.

The mosquito gut microbiome usually blooms in response to an ingestion of blood, helping to ward off parasites like Plasmodium falciparum, which causes malaria, by mounting an immune response. When a team led by scientists from Imperial College London fed mosquitoes blood with clinically relevant levels of a common antibiotic mixture of penicillin and streptomycin, the protective microbiome radically shifted in composition, losing half of its species diversity. After the treated mosquitoes feasted on the blood of Plasmodium-infected mice, 21 percent more of the insects carried the malaria parasite. The researchers found a similar result when they fed the mosquitoes human blood from malaria patients mixed with the antibiotic cocktail....

Although the gut microbiome can protect mosquitoes from parasites, its rapid proliferation after the insects feed can also hamper the hosts’ fitness. The researchers found that treating the mosquitoes with antibiotics led to increases in the number of egg-bearing females, the number of eggs per female, and mosquito survival rates, suggesting that antibiotics can boost the populations of both P. falciparum and its insect vectors. The common use of antibiotics to treat fevers, tuberculosis, leprosy, and other diseases in areas such as sub-Saharan Africa could thus impact malaria treatment, the authors wrote in their paper.

“Ultimately, we hope that understanding any hidden effects of different antibiotics would mean we can combat the spread of malaria more effectively,” study coauthor George Christophides of Imperial College told United Press International.