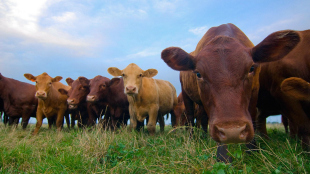 WIKIMEDIA, RYAN THOMPSON/US DEPARTMENT OF AGRICULTUREIn an effort to slow the problem of antibiotic resistance, the US Food and Drug Administration (FDA) announced new rules for farmers. No longer will farmers be able to give animals antibiotics to make livestock or poultry grow bigger. And if an antibiotic is needed to treat a sick animal, farmers will have to get a prescription from a veterinarian.

“With these changes, there will be fewer approved uses, and the remaining uses will be under tighter control,” Michael Taylor, deputy commissioner for foods and veterinary medicine at the FDA, told CNN.

The plan hinges on pharmaceutical companies complying with a request to change the labeling on their products. Drugmakers are asked to remove language from the labeling of antibiotics touting their growth-promoting qualities, but are not required to do so. “Once manufacturers voluntarily make these changes, the affected products can then only...

Some, including the American Meat Institute and the Animal Health Institute, support the move. Clinton Lewis, Jr., the executive vice president and president of U.S. operations for Zoetis, the country’s largest animal pharmaceutical company, told POLITICO: “We agree with [FDA] that this is the fastest way to address their questions and concerns.”

But others are critical of the agency’s plan because it is a volunteer-based effort.

“The FDA’s voluntary guidance is an inadequate response to the overuse of antibiotics on the farm with no mechanism for enforcement and no metric for success,” Rep. Louise Slaughter (D-N.Y.), a microbiologist, said in a statement. But the FDA believes its approach will work. “Based on our outreach, we have every reason to believe that animal pharmaceutical companies will support us in this effort,” Taylor said in a statement.