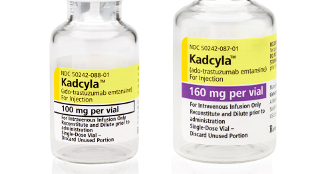 The US Food and Drug Administration (FDA) last week approved a new drug that combines a tumor-targeting antibody with a cell-killing toxin to more effectively treat patients with HER2-positive metastatic breast cancer, an aggressive form of the disease characterized by the overabundance of a cell membrane protein called human epidermal growth factor receptor type 2, or HER2. Developed by California-based biotechnology company Genentech and sold under the brand name Kadcyla, the new drug is one of the first successful antibody-drug conjugates (ADCs)—a new class of therapies that link toxic payloads to antibodies.

Kadcyla is a combination of Genentech’s widely used antibody trastazumab (sold as Herceptin) with a cytotoxin called DM1. The antibody latches onto the surface of HER2 breast cancer cells, where the toxin is delivered. And since the toxin is not activated until it reaches the tumor, healthy cells are spared, which means fewer side effects for the patient....

The FDA decision follows a successful Phase III trial in which Kadcyla extended the median survival time of women with advanced HER2 breast cancer, who did not respond to Herceptin and a chemotherapy drug, by almost 6 months. What’s more, fewer patients treated with Kadcyla suffered side effects, though the drug’s label warns that it was found to cause liver toxicity, heart toxicity, and severe life-threatening birth defects in some patients.

ADCs are a promising area for cancer drug developers, with more than two dozen currently in clinical trials according to The New York Times, so the approval of Kadcyla is an encouraging step. Indeed, as “a highly effective therapy without the toxicity that is so common to many cancer therapies today,” Kadcyla’s success should inspire a whole new generation of ADCs, Daniel Junius, president and chief executive of Massachusetts–based company ImmunoGen that helped develop the therapy, told a Nature blog.