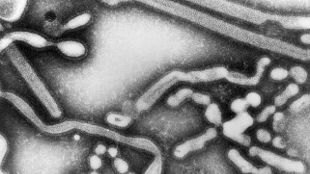 Transmission electron micrograph of influenza A virusWIKIMEDIA, CDC/ERSKINE PALMERAmphotericin B (AmphoB), an antifungal compound often given to chemotherapy or bone-marrow transplant patients, neutralizes an antiviral immune protein in mice, rendering the animals more susceptible to influenza A infection, according to a study published today (November 21) in Cell Reports.

“Sometimes a very useful drug can also have unforeseen effects,” lead author Abraham Brass, from the University of Massachusetts Medical School, said in a press release. “We now see that a major part of the body’s natural defenses to influenza virus is rendered inactive by Amphotericin B.”

Specifically, Brass and his colleagues found that AmphoB inhibits the mouse interferon IFITM3, which typically keeps influenza replication in check. As a result, mice treated with the drug “succumbed to a normally mild IAV infection,” the authors wrote.

“When we treated lung cancer cells with the antifungal drug, we saw the antiviral protection from IFITM3 pretty much disappear,” coauthor Christopher Chin, a research associate in Brass’s lab, said in the press release.

Though the results must be replicated in humans, the clinical implications are clear. “[P]atients receiving antifungal therapy with clinical preparations of AmphoB may be functionally immunocompromised and thus more vulnerable to influenza, as well as other IFITM3-restricted viral infections,” the authors wrote in the paper.

Peter Openshaw from Imperial College London told BBC News that while patients prescribed AmphoB should not stop taking the drug, “this is a quite worrying and unexpected finding.” He added that such patients should consider getting vaccinated against seasonal flu.