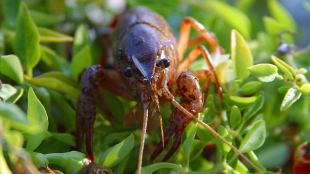 WIKIMEDIA, WEFTZap a crayfish with electricity and the animal appears to experience anxiety: the crustacean will no longer venture out of its comfort zone, scientists reported last week (June 13) in Science. But inject the stressed crayfish with an anti-anxiety drug, and the animal is more willing to explore its environment.

“This work shows the behavior is consistent with a state of anxiety,” Bob Elwood, who studies invertebrate stress at Queen’s University Belfast and who was not involved in the study, told BBC News. “But pinning together what the animals are feeling is the impossible thing. We know how we are feeling, and we know the behavior associated with that—but you cannot ask a crayfish how it feels.”

This is the first demonstration of anxiety-like behavior in invertebrates, and crayfish join a list of other animals, in addition to humans, that display anxiety. The New York Times...

The authors suggested their findings might alter the way humans appreciate invertebrates’ emotional states. “I think it must be regarded as a possibility that they experience anxiety and pain,” Elwood told the BBC. “And if we consider there is a possibility, then effective safeguards against inflicting pain should be taken just to be on the safe side, and we should also ensure they are killed rapidly.”