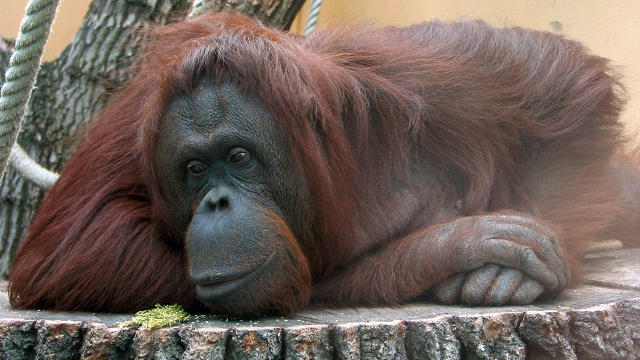 WIKIMEDIA, ZYANCEThe theory of mind, which describes the capacity to infer another’s thoughts, may have just gotten a little broader. Although such an ability is commonly thought to apply only to humans, researchers have now shown that some of our great ape cousins—chimps, bonobos, and orangutans—may be similarly skilled. The international team of scientists showed dozens of nonhuman primates a video and tracked their eyes as the animals anticipated the actions of people in the scene. The animals appeared to react according to beliefs, even false ones, they perceived as being held by the actors. The results were published yesterday (October 6) in Science.

“People have thought for a while that false-belief understanding is unique to humans,” study coauthor Christopher Krupenye at the Max Planck Institute for Evolutionary Anthropology in Leipzig, Germany, told Scientific American, “and so this suggests that apes do have at least a basic,...

Krupenye and colleagues showed 40 great apes a video depicting interactions between a human and a person dressed in a gorilla costume. For example, in one scene shown to the primates, the costumed person appears to attack the human and then takes refuge in one of two haystacks in the foreground as its victim watches. Then the human departs and the costumed “ape” leaves the haystack. As the human returns, apparently to look for his assailant, the researchers tracked the eye movements of the apes watching the video. Thirty of the test subjects focused their attention on the haystacks, and of those, about two-thirds zeroed in on the haystack where the fake gorilla was hiding, the researchers reported.

“They can anticipate that an individual will search for an object where they last saw it, even though the apes know that it’s no longer there,” Krupenye told New Scientist. “That is a really important human skill that has never been shown before in apes.”

“It’s a pretty shocking result,” Yale University cognitive psychologist Laurie Santos who was not involved in the work told Nature. And while the effect reported by the study is small, added Santos, “if these results hold up, they’ll be a game changer for the way that people think about primate social cognition.”