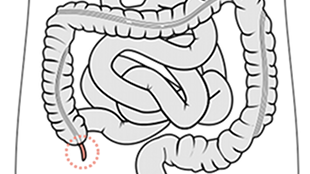 WIKIMEDIA, OLEK REMESZThe evolution of the appendix was not an accident, the Huffington Post reported. Researchers analyzed relatedness of the 50 out of 361 living mammalian species that have appendices. They found that the appendix had evolved independently 32 to 38 times and was lost only seven times, making it likely that it evolved for a reason.

The purpose of the appendix remains a mystery, however. While some scientists have thought must have originally evolved to aid in digestion, the study, published in the journal Comptes Rendus Palevol earlier this month (February 7), refutes that hypothesis.

The researchers came to this conclusion by analyzing the historical diets of the species that had evolved appendices. They found that the appearance of an appendix had no correlation with diet changes, indicating that despite being located in our gut, the appendix is not involved in digestion.

The paper’s authors support the hypothesis...

But Randolph Nesse, a biologist at the University of Michigan, Ann Arbor, is not entirely convinced, maintaining the appendix’s purpose is still unkown. "One wonders why such a trait with such a function would not be universal," he told The Huffington Post.