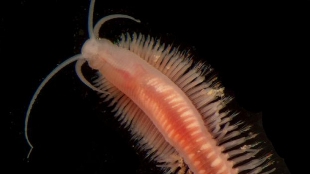 Deep-sea worms living near Costa Rica and off the western United States like to munch on single-celled Arachaea, according to a study published online in the International Society for Microbial Ecology Journal, a subsidiary of the journal Nature.

Archaea, thought to be one of Earth’s most abundant life forms, have been found in nearly all corners of the globe, including some of the planet’s most inhospitable environments, such as geysers and oil wells. They are significant contributors to the global ecosystem, playing key metabolic roles in the nitrogen, sulfur, and carbon cycles. Until now, however, scientists weren’t sure if they were ever eaten. But Dorvilleid worms living at deep-sea cold seeps—where hydrogen sulfide, methane, and other hydrocarbon-rich fluid seeps through the ocean floor— off the coasts of Costa Rica and the US west coast...

To confirm the worms they found really were eating the Archaea, the researchers brought them back to the lab where they were offered a variety of diets, including two types of Archaea, bacteria, spinach, and rice. The worms seemed equally capable of living on all the types of food. “That showed us that Archaea can be a viable food source for at least some animals,” Andrew Thurber, a post-doctoral researcher at Oregon State University and lead author on the study, said in a press release. They also found the same isotopic signature of the methane that the Archaea consumed in the worms. The researchers suspect that the worms use their teeth to scrape Archaea off the rocks in the deep-sea seeps.

The Archaea found near the worms in the deep-sea seeps consume the greenhouse gas methane. This is no surprise, as Archaea species are known to play a big role in keeping marine methane out of the atmosphere. But the fact that worms then consume the Archaea adds a twist to the story.

Consumption of Archaea, dubbed “archivory” by the authors, may be much more common that scientists realize, Thurber added. “It could be that many other animals are consuming Archaea but we haven’t been able to detect it.”