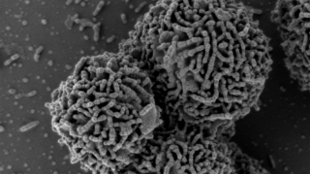 Planococcus halocryophilus ORI growing at -15ºC in a 18% salt solutionIMAGE COURTESY OF McGILL UNIVERSITYOne of the things that makes it extremely hard for life to flourish in foreboding places like Mars and the moons of Saturn is the punishing cold. Without the benefit of a blanket-like atmosphere, these celestial bodies have average temperatures well below freezing. Now, researchers from McGill University in Montreal have discovered a bacterium living in the frozen permafrost of the high Arctic that is yielding clues about how extraterrestrial organisms might endure such conditions.

The permafrost bacterium, Planococcus halocryophilus strain Or1, grows and divides at -15°C and can even remain metabolically active at -25°C. McGill environmental microbiologist Lyle Whyte and colleagues isolated the bacteria from Ellesmere Island in the Canadian high Arctic by screening about 200 microbes from the same ecosystem looking for those best adapted to the harsh conditions. They discovered that...

“We believe that this bacterium lives in very thin veins of very salty water,” said Whyte in a statement. “The salt in the permafrost brine veins keeps the water from freezing at the ambient permafrost temperature (~-16ºC), creating a habitable but very harsh environment,” he added. “It’s not the easiest place to survive but this organism is capable of remaining active (i.e. breathing) to at least -25ºC.”

Exploring the genome of the bacterium, Whytes team found evidence of significant modifications to cellular and membrane structures and functions and increased amounts of cold-adapted proteins and molecules, such as anti-freeze-like compounds. “What we can learn from this microbe may tell us a lot about how similar microbial life may exist elsewhere in the solar system,” Whyte said.