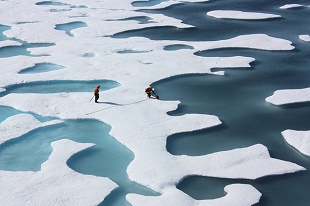 FLICKR, NASA GODDARDThe Arctic’s earliest human inhabitants migrated into the region from Siberia approximately 6,000 years ago. These so called Paleo-Eskimo peoples lived in isolation—despite periodic migrations of other populations—before suddenly vanishing 700 years ago, according to a study published last week (August 29) in Science.

This genetic analysis of 169 ancient and present-day humans used museum specimens of bones, teeth, and hair from Alaska, Canada, and Greenland; the researchers, led by Maanasa Raghavan and Eske Willerslev of the University of Copenhagen in Denmark, also sequenced the genomes of modern-day Native American, Inuit, and Aleutian Islander families to enable comparative analyses.

Their results showed that Paleo-Eskimos spread into the Arctic independent of Native American and Inuit migrations. Although it periodically abandoned the area, this Paleo-Eskimo population lived there in near-isolation for almost 4,000 years before disappearing. The team’s analyses also showed that modern-day Inuits are not directly related...

“Elsewhere, as soon as people meet each other, they have sex,” Willerslev told National Geographic. “Even potentially different species like Neanderthals [and modern humans] had sex, so this finding is extremely surprising.”

Instead, this population may have developed medical problems as a result of continuous inbreeding, which may have contributed to their eventual extinction, Willerslev told The New York Times. Another potential factor may have been climate change, as periodic fluctuations of even a few degrees could cause a loss of marine food resources.

“By using genetics and genomics, they were able to answer questions that archaeologists have been trying to solve for decades,” anthropologist Todd Disotell of New York University who was not involved in the research told the New York Times. “With genetics, you’re looking at the ancient people themselves, not their refuse, so to speak.”