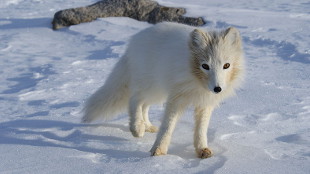 Arctic FoxWikimedia, Algkalv (talk)In the past year, the Arctic has seen the tiniest summertime snowpack in recorded history, the lowest snow accumulation, the most extensive melt of the Greenland Ice Cap, and the highest permafrost temperatures of the North Slope of Alaska, according to a new Arctic assessment report released this week (December 5). The dramatic effects of a warming climate on the far North will likely impact global weather patterns and local animal species, climatology scientists say.

“Conditions in the Arctic are changing in both expected and sometimes surprising ways,” Jane Lubchenco, head of the National Oceanic and Atmospheric Administration, told Nature. And “what happens in the Arctic doesn’t always stay in the Arctic,” she added.“We’re seeing Arctic changes that affect weather patterns in the U.S.”

In addition to atmospheric changes, scientists say the altered Arctic will affect native organisms, including the Arctic fox, whose population...

Part of the reason climate changes have had such a profound impact on the far north is because the loss of snow and icepack has darkened land and water surface, causing more sunlight to be absorbed, as opposed to reflected. “The Arctic is one of Earth’s mirrors,” Donald Perovich, an Arctic researcher at Dartmouth College, who participated in the report, told Nature. “And that mirror is breaking.”