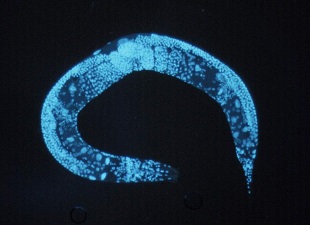 WIKIMEDIACutting back on food makes worms live twice as long as normal, according to a study published last week (June 19) in PLOS Genetics.

Caenorhabditis elegans grow from larvae to adulthood in three to four days, making the nematodes an ideal model for studying development. Researchers at Duke University found that when C. elegans larvae were starved at a stage when they’re actively forming large amounts of tissue, the worms quickly entered a quiescent state.

“These pathways are conserved in mammals and are linked to growth processes and diseases,” the authors wrote in their paper. “It is possible that similar checkpoints may also be important in human development.”

Being starved for as long as two weeks at this late larval stage had no apparent...

“The main question is how the decision is made to either arrest development or continue,” coauthor Adam Schindler, told BBC Nature. “Understanding the key players in this decision could provide insights into why tissues degenerate during ageing and reveal possible ways of slowing this degeneration.”