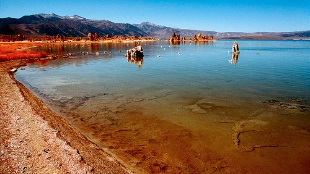 Not even a year ago, microbiologist Felisa Wolfe-Simon, then a NASA astrobiology research fellow, and her colleagues published their now-infamous Science paper reporting evidence that bacteria discovered in California’s Mono Lake could replace the phosphorus in its DNA backbone with arsenic.

The study was widely questioned and criticized, and yesterday, a group of scientists declared that they had tried and failed to replicate the results.

“Their most striking claim was that arsenic had been incorporated into the backbone of DNA, and what we can say is that there is no arsenic in the DNA at all,” Rosie Redfield, microbiologist at the University of British Columbia and ringleader of the project,  told Nature.

The debate about the science of these bacteria, dubbed GFAJ-1, has been couched in an entirely separate debate: one about peer review and open science. Redfield was one of...

The NASA researchers throughout the process have derided criticism that is not peer-reviewed, and they again told Nature that they “hope to see this work published in a peer-reviewed journal, as this is how science best proceeds.”