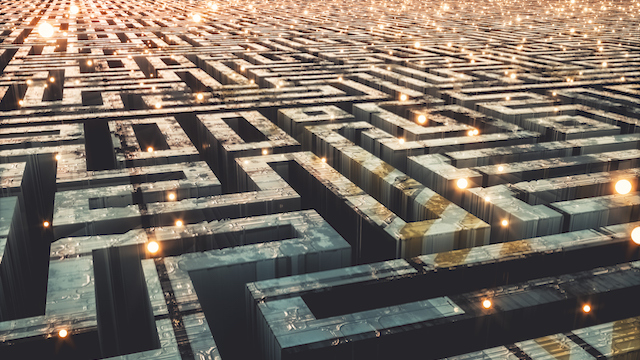 A computer program can learn to navigate through space and spontaneously mimics the electrical activity of grid cells, neurons that help animals navigate their environments, according to a study published yesterday (May 9) in Nature.

“This paper came out of the blue, like a shot, and it’s very exciting,” Edvard Moser, a neuroscientist at the Kavli Institute for Systems Neuroscience in Norway who was not involved in the work, tells Nature in an accompanying news story. “It is striking that the computer model, coming from a totally different perspective, ended up with the grid pattern we know from biology.” Moser shared a Nobel Prize for the discovery of grid cells with neuroscientists May-Britt Moser and John O’Keefe in 2014.

When scientists trained an artificial neural network to navigate in the form of virtual rats through a simulated environment, they found that the algorithm produced patterns of...

The team then tested the program in a more-complex, maze-like environment, and found that not only did the virtual rats make their way to the end, they were also able to outperform a human expert at the task.

“It is doing the kinds of things that animals do and that is to take direct routes wherever possible and shortcuts when they are available,” coauthor Dharshan Kumaran, a senior researcher at Google’s AI company DeepMind, tells The Guardian.

DeepMind researchers hope to use these types of artificial neural networks to study other parts of the brain, such as those involved in understanding sound and controlling limbs, according to Wired. “This has proven to be extremely hard with traditional neuroscience so, in the future, if we could improve these artificial models, we could potentially use them to understand other brain functionalities,” study coauthor Andrea Banino, a research scientist at DeepMind, tells Wired. “This would be a giant step toward the future of brain understanding.”