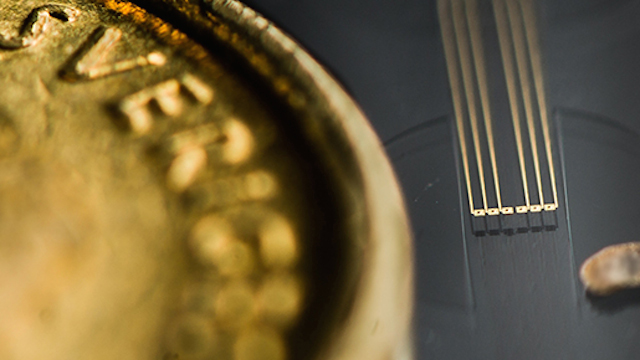 The ion pump next to a Swedish 10kr coinLINKÖPING UNIVERSITY, THOR BALKHED

A team of researchers at Linköping University in Sweden has designed an artificial ion pump that delivers compounds, such as neurotransmitters, to precise locations in a matter of milliseconds—close to the spatial and temporal precision of neurons. The device is the latest advance toward technology to repair or replace faulty neuronal signaling.

The team last year demonstrated that a similar ion pump could alleviate pain in rats by injecting the neurotransmitter GABA directly into nerves of the spinal cord. However, the delivery system was not quick enough to mimic the speed at which neurons communicate with one another.

The latest model, described in a paper published today (November 2) in Science Advances, represents “the last important part of the puzzle in the development of the ion pump. When a signal passes between two synapses it takes...

“We have produced artificial nerves that can communicate seamlessly with the nervous system,” he continued. “After more than 10 years’ research we have finally got all the parts of the puzzle in place.”

The microfabricated devices consist of a tiny pump with one to six outlets, each that can be individually controlled, which deliver neurotransmitters to specific sites on the scale of individual cells.

The devices have so far only been tested in the lab, but the team is now working on trials involving live cells, according to the press release.