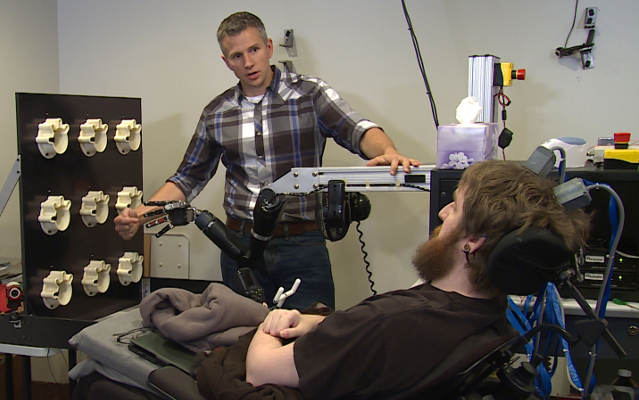 Researcher Rob Gaunt prepares Nathan Copeland for sensory testing.UPMC/PITT HEALTH SCIENCESFollowing surgery to connect his brain to an array of electrodes, Nathan Copeland, who was paralyzed from the upper chest down in a car accident in 2004, experienced a natural touch sensation in response to stimulation of his sensory cortex, according to a study published today (October 13) in Science Translational Medicine.

“For most tasks that involve manipulation of objects, you’re really relying on the sense of touch to guide movement—you’re not using vision, necessarily,” study coauthor Jennifer Collinger of the University of Pittsburgh told Scientific American. “You don’t have any visual feedback on how hard you’re squeezing it, or what you need to do to maintain stable posture. All of that comes from the sense of touch.”

The researchers implanted a microelectrode array in Copeland’s somatosensory cortex, the brain region involved in touch perception. Once...

“I can feel just about every finger—it’s a really weird sensation,” Copeland said about a month after surgery, according to a press release. “Sometimes it feels electrical and sometimes its pressure, but for the most part, I can tell most of the fingers with definite precision. It feels like my fingers are getting touched or pushed.”

“The ultimate goal is to create a system which moves and feels just like a natural arm would,” study coauthor Robert Gaunt of Pittsburgh said in the release. “We have a long way to go to get there, but this is a great start.”