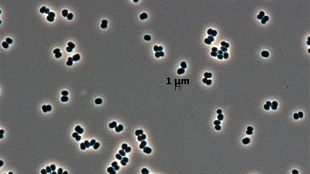 The berry-shaped Tersicoccus pheonicis, the species of bacteria discovered in a NASA clean roomsNASA/JPL-CALTECHScientists have discovered an entirely new genus of bacteria residing in some of the harshest conditions on the planet: those that are designed to keep clean rooms used to build spacecraft free of microbes. The bacterium, dubbed Tersicoccus phoenicis, was found on the floor of a clean room at NASA’s Kennedy Space Center in Florida and in a clean room maintained by the European Space Agency in French Guiana, more than 4,000 kilometers (about 2,500 miles) away.

The clean rooms, which are used to assemble spacecraft such as the Phoenix Mars Lander, are kept dry, routinely bleached, and have negative air pressure—all efforts to discourage the incursion and growth of microbes. T. phoenicis survives with almost zero nutrients, Parag Vaishampayan, a microbiologist at NASA’s Jet Propulsion Laboratory in California, told The Telegraph....

The microbe was first detected in one of NASA’s regular swabs of clean room facilities meant to monitor for such contaminants. Vaishampayan and colleagues published a description of the bacterium, which measures only one micrometer across, in the July issue of the International Journal of Systematic and Evolutionary Microbiology.