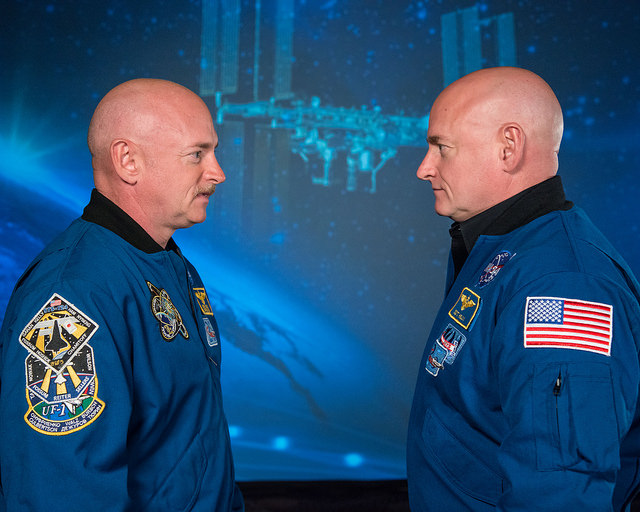 Astronaut Scott Kelly (right) and his twin brother, retired astronaut Mark Kelly (left) ROBERT MARKOWITZ, FLICKR Astronauts Scott and Mark Kelly are identical twins and the test subjects of the NASA Twin study, a unique investigation into how stressful spaceflight is to the body. While Scott Kelly spent 340 days at the International Space Station (ISS), his twin brother remained on Earth and became a ground-based control subject. Since Scott returned home last March, ten groups of researchers have been analyzing biological samples collected from each sibling before, during, and after the trip. The scientists released preliminary results at the annual Investigator’s Workshop for NASA’s Human Research Program in Texas (January 23 to 26).

“Almost everyone is reporting that we see differences,” Christopher Mason, a geneticist at Weill Cornell Medicine who was involved in the study, told Nature. For example, researchers found Scott’s telomeres were longer and his levels...

One potential explanation, according to The Verge, is the specialized diet astronauts eat in space. But if the astronaut diet was entirely to blame, one would expect to see a change in the number of difference species in Scott’s microbiome. This was not the case. “Some of the gut bacteria is normally introduced in the food, so we thought there might be a loss in some species,” Martha Hotz Vitaterna, a neurobiology professor at Northwestern who conducted the microbiome study, told The Verge. “We were actually quite surprised to see no evidence of a reduction in the number of species present.”

The results from this study may one day inform how stressful a longer trip—a mission to Mars, for example—might be to the body. For now, the results are preliminary, and the researchers will need to confirm whether these changes were truly the result of being of space or simply due to individual differences. NASA intends to publish formal results by the end of 2017.