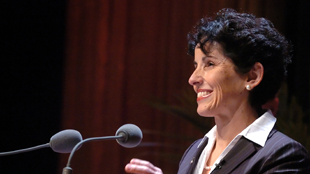 France Cordova has been nominated to be the next director of the National Science FoundationPURDUE UNIVERSITYAstrophysicist France Anne Cordova was tapped by President Barak Obama Wednesday (July 31) to become the 14th director of the National Science Foundation (NSF). Cordova would replace former director Subra Suresh, who resigned less than halfway through his 6-year term to become the president of Carnegie Mellon University. Interim director Cora Marrett has run the $7 billion agency since March 2013.

Born in France, the 65-year-old Cordova earned her doctorate from the California Institute of Technology in 1979. She then spent 10 years at Los Alamos National Laboratory before heading the department of astronomy and astrophysics at Pennsylvania State University. She served as NASA’s first female chief scientist from 1993 to 1996. She has also served as chancellor of the University of California, Riverside, and president of Purdue University from 2007 to...

“She’s a very accomplished academic researcher,” Umar Mohideen, chairman of the physics and astronomy department at the University of California, Riverside, told Nature. “She’s managed [in] academia, and those are qualities that would make her a good choice.”

Cordova’s nomination will need to be approved by the Senate, whose high regard for the NSF will likely make the process a formality. However, it could still take months due to bureaucratic maneuvers employed by Republican lawmakers to delay the appointment of Obama’s administration nominees.