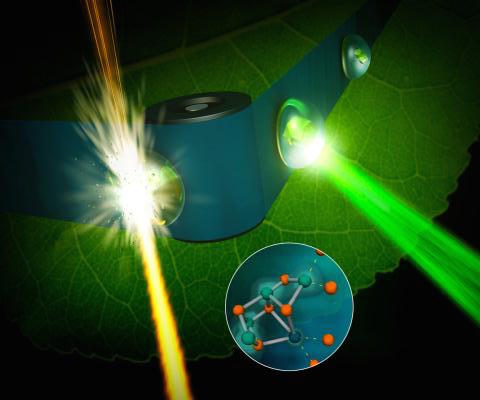 “We have been trying for decades to understand how plants split water into oxygen, protons, and electrons,” said coauthor Vittal Yachandra of the Lawrence Berkeley National Laboratory, in a press release. “Understanding how nature accomplishes this difficult reaction so easily is important for developing a cost-effective method for solar-based...

Most of this action takes place in the thylakoid membrane, a compartment within chloroplasts that houses light-dependent, photosynthetic reactions. Until now, scientists based most of their conclusions on cryo-imaging, or X-ray techniques that shatter the chloroplast. This new approach uses rapid laser pulses—to the tune of 40 femtoseconds per pulse—that capture the data before the sample is destroyed. “The stages of photosystem II do not proceed at freezing temperatures,” said coauthor Junko Yano, also of Berkeley Lab, in the press release. “What we have been able to do for the first time using X-ray lasers is study this process at room temperature so we can tell what is actually happening in nature.”

The new images confirmed the results of prior research, but also raised new questions. “To our surprise, we found that the two leading theories explaining the mechanisms for how the reaction proceeds are probably not correct,” Yachandra said in the press release. “If the theories were correct, we would have seen water binding to specific sites and other predicted features in the protein. This means that something else is going on, so now we’re homing in on the right answer by process of elimination.”