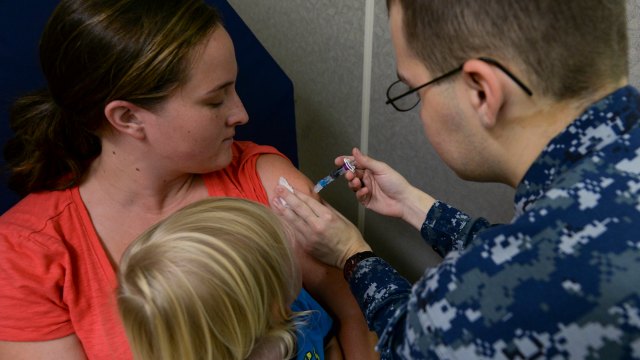 WIKIMEDIA, PETTY OFFICER 2ND CLASS LAURIE DEXTERKids whose mothers were infected with flu or who received a flu shot while pregnant are no more likely to develop autism than other children. That’s according to a study of more than 196,000 children published in JAMA Pediatrics yesterday (November 28).

“Our data showed pretty convincingly that there was no association with influenza at any time during pregnancy and autism in the child,” senior author Lisa Croen of Kaiser Permanente Northern California in Oakland told Reuters Health. “We’re not recommending that any changes be made to the vaccination policy. We are encouraging women to get vaccinated while pregnant.”

Prior studies have produced a mixed bag of results about the association between infection during pregnancy and autism risk. To determine whether there is a link between maternal influenza and autism, Croen and colleagues examined the medical records of 196,929 kids born in...

“Autism links as the authors stated are complex, and autism is a diagnosis over time,” Diane Harper of the University of Louisville told MedPage Today. “Continued observation and epidemiology will be necessary to continue to follow this question.”

As for other vaccines, multiple studies have found no association between autism and routine shots. Although one recent study published in Frontiers in Public Health on November 21 did report a positive association, the paper is now getting a re-review due to heavy criticism about its poor quality and potential conflicts of interest, Retraction Watch reported.