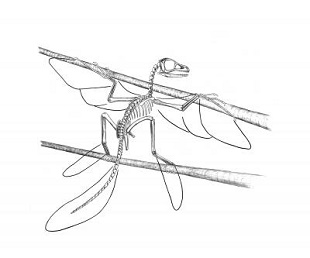 EUREKALERT, STEPHEN CZERKASAn analysis of a sparrow-sized fossil has challenged the present status of dinosaurs as ancestors of modern birds, according to a study published in the July 2014 issue of the Journal of Ornithology.

The tiny creature, named Scansoriopteryx (meaning “climbing wing”), was previously classified a coelurosaurian theropod dinosaur, a group that scientists considered the ancestors of flying dinosaurs and modern birds. But a recent analysis of a fossil from Inner Mongolia using advanced 3-D microscopy and high-resolution photography revealed previously ambiguous structures in the animal’s pelvis, limbs, and tail. The examination also revealed elongated tail tendons along its vertebrae that resemble those seen in Velociraptor.

Scansoriopteryx did have feathered wings, but its skeleton lacks “the salient characters necessary to be regarded as dinosaurs,” according to study authors Stephen Czerkas of the Dinosaur Museum in Blanding, Utah, and Alan Feduccia of the University of North Carolina....

In their paper, the authors described these early birds as “clearly arboreal,” with an ability to perch and climb trees and branches using manual digits. Scansoriopteryx may also have used its elongated digits to glide into landings the way modern gliding lizards do, rather than landing in the manner of bipedal birds.

“The identification of Scansoriopteryx as a non-dinosaurian bird enables a reevaluation in the understanding of the relationship between dinosaurs and birds,” Czerkas said in a statement. “Scientists finally have the key to unlock the doors that separate dinosaurs from birds.”