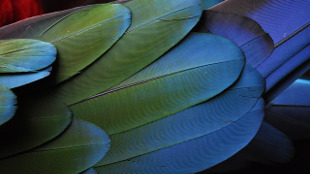 Behind the bright and iridescent coloration of many exotic bird feathers are precise arrangements of nanoparticles called melanosomes. Because they contain the natural pigment melanin, arrangements of these particles can reflect specific wavelengths of light while absorbing others; the result is a narrow range of reflected wavelengths and hues called structural colors. As researchers from the University of Akron in Ohio and the University of California, San Diego (UCSD), reported in the American Chemical Society’s ACS Nano earlier this month (May 4), assemblies of synthetic nanospheres containing melanin can mimic this process, creating highly pure colors, which could be useful for optical sensors or protective coatings.

“Instead of having two components to mix, you have one component. That’s innovative and really cool,” ornithologist Richard Prum of Yale University, who was not involved in the study, told Chemical & Engineering News. Although other researchers had used the...

“What has kept me fascinated for 15 years is the idea that one can generate colors across the rainbow through slight (nanometer scale) changes in structure,” coauthor Matthew Shawkey, who studies optics at the University of Akron, said in a statement.

The team evaporated controlled concentrations of solutions containing polydopamine particles onto silicon wafers to generate red, orange, yellow, and green films. The purity of the colors (as high as 95 percent) could be maintained across small swaths of the films, reaching one square millimeter. However, when the dried nanoparticle layers were spread over larger surfaces, they varied in thickness, altering the structural colors.

“Moving forward, we want to control these processes better so that we can re-create many different shapes that mimic natural melanosomes, including rods and hollow spheres,” coauthor Nathan Gianneschi, a biochemist at UCSD told Chemical & Engineering News.