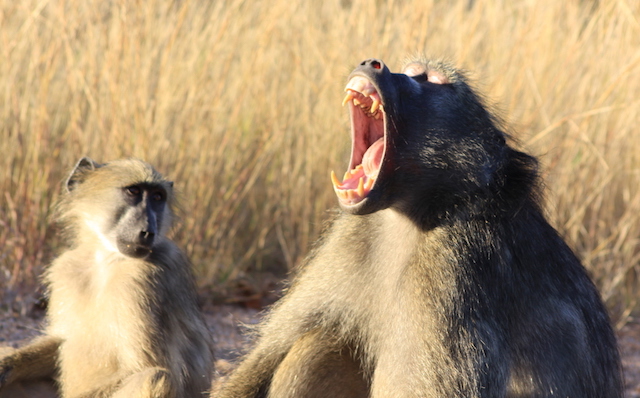 Baboons can produce some of the precursors to human speech, according to a study published January 11 in PLOS ONE. These findings suggest human-like language, complete with vowel sounds, may have emerged much earlier than previously thought.

Scientists long suspected that a low larynx, which most primates lack, was necessary to produce the vowel sounds that are so integral to human language. There were, however, hints that this might not be the case—prior studies had suggested that human infants whose larynxes had not yet descended could still make vowel sounds.

To test if monkeys could do the same, Louis-Jean Boë, a primatologist at Grenoble Alpes University in France, and his colleagues analyzed over 1,000 vocalizations from 15 guinea baboons, a monkey species from West Africa. In the recordings, they discovered five distinct sounds that appeared to correspond to vowels in human languages.

“Theories of language evolution have developed based on the idea that full speech was only available to anatomically modern Homo sapiens,” Thomas Sawallis of the University of Alabama and a study co-author, told Scientific American. These theories suggest that language emerged 70,000 to 100,000 year ago, but this new study reveals it may have been as long as 25 million years ago, with the last common ancestor of humans and baboons.

“If the seeds of speech were planted 25 million years ago instead of 100,000 years ago, that’s an enormous difference,” Sawallis added.