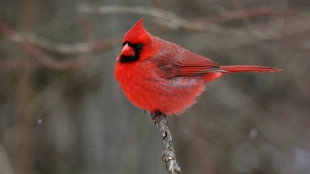 Each February for the past 15 years, birders in Canada and the UnitedStates have had the opportunity to participate in the Great Backyard Bird Count, cataloging avian species and counting abundances observed on their own patch of terra firma. But this year, the 4-day event was expanded to include anyone with a functioning internet connection, and the preliminary data is setting new records. Birders from Australia to Zimbabwe have counted 25 million birds and more than 3,100 species, with reports still pouring in.

A Northern Cardinal, one of the most reported birds counted in the first global Great Backyard Bird CountWIKIMEDIA, DOMINIC SHERONY“This is a milestone for citizen science in so many respects—number of species, diversity of countries involved, total participants, and number of individual birds recorded,” said John Fitzpatrick, director of the Cornell Lab of Ornithology, in a statement. “We hope this is just the start...

The Cornell Lab along with Audubon and Bird Studies Canada oversee the annual count and reported that they’ve received 116,000 checklists from bird counters using the eBird system so far. Birders in more than 100 countries across the globe participated in the count, helping to piece together patterns such as the presence of some European bird species in the U.S., a lingering result of Hurricane Sandy’s forceful winds. Data will continue to be analyzed until March 1.