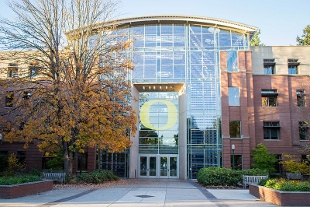 Lillis Hall at the University of OregonWIKIMEDIA, VISITOR7Various aspects of a building’s design and use, including the number of doors per room, its average occupancy, and the way air circulates, can influence the makeup of the bacterial communities that occupy the space, according to a study published this week (January 29) in PLOS One.

The research comes from biologists and architects at the University of Oregon’s Biology and the Built Environment Center, who vacuumed up dust samples from around the university’s Lillis Hall, then analyzed bacterial DNA from the samples to estimate microbial diversity. “What we did in our paper was ask this really fundamental question,” center director Jessica Green told Popular Science. “Given this hypothesis that is becoming more and more actualized—that the indoor microbiome is important to health—do we have any control over what kind of microbes are indoors or out?”

Of course, the impact of these diverse indoor microbiomes on human health remains to be seen. But Green told Popular Science that she suspects such microbial surveys will become more common in the future, perhaps to receive an indoor microbiome certification for public buildings or as part of a routine home inspection prior to purchase. Hospitals are also likely to be interested in what bacteria are populating their rooms and hallways.

“In a hospital . . . without good ventilation, you get the bacteria that hang around sick people dominating the room, and that leads to problems,” ecologist and bioinformatics researcher James Meadow told Quartz.