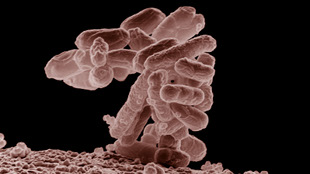 WIKIMEDIA, USDAA team of British researchers genetically modified Escherichia coli bacteria to convert sugar and yeast extract into long-chained hydrocarbons, otherwise known as diesel molecules, according to a report out this week (April 22) in Proceedings of the National Academy of Sciences.

“Rather than making a replacement fuel like some biofuels, we have made a substitute fossil fuel,” lead author John Love of the University Exeter, U.K., told BBC News. “The idea is that car manufacturers, consumers, and fuel retailers wouldn’t even notice the difference—it would just become another part of the fuel production chain.”

The researchers took a strain of E. coli that usually converts sugar to fat and spliced into its genome DNA sequences from several sources—including the insect pathogen Photorhabdus luminescens, the cyanobacterium Nostoc punctiforme, the soil microbe Bacillus subtilis, and the camphor tree Cinamomum camphora. For the moment,...

The mechanism by which the genetically engineered microbes expel the hydrocarbons from their cells remains a mystery, but the major challenge is to scale up the process to produce synthetic diesel molecules at the low cost and high volumes required to make it a viable alternative to fuels made from fossil sources.

“We wanted to make biofuels that could be used directly with existing engines to completely replace fossil fuels,” Love told Scientific American. “Our next step will be to try to develop a bacterium that could be deployed industrially.”